Hello dear Entropia Community,
today is the day, the next patch is waiting for you again!
Many visual things have been changed, some smaller suggestions have been adopted and many more minor changes have been added!
More information can be found in each section of the patch-notes!

Some of your community suggestions that were not included in this patch may follow in the next patch!

Flaris was completely changed by us and equipped with new unseen & more nicer models, which were made by us for Entropia.

The Flaris Rework may contain a few minor bugs that could lead to short and light FPS drop depending on the computer.
However, we will monitor the situation and patch adjustments to the Flaris Map!

Have a look around the game and give us your feedback on our Discord Server! :)

Saint City was also reworked by us and equipped with new models!
We made a little bit more space on this map, so that in the future more shops will find their place in Saint Morning! :)

Performance technically Saint City is better than Flaris and shouldn't cause any problems! :D

Informations about the Maps:
If you find errors on the maps which lead to performance problems, please screen the place with your current framerate displayed (CTRL + F).
and send them to us on our Discord Server in one of the #bug Channels!

If the performance of some of the maps is not okay (especially Flaris), then play around with the graphics options in the game until we fix it! 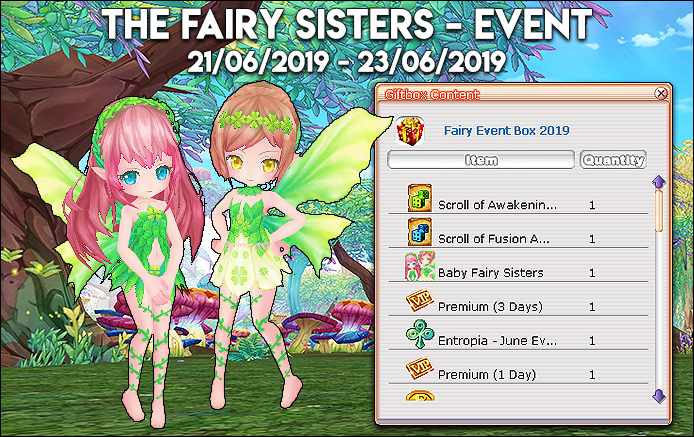 The Fairy Sisters Event has been started until Sunday - 23:59 PM UTC+2!
The Fairy Sisters appearing everywhere in Madrigal (+Trigram/Etrhal) and they drop
"Fairy Event Boxes" if you beat them!

Search for the sisters and get great items from their boxes! 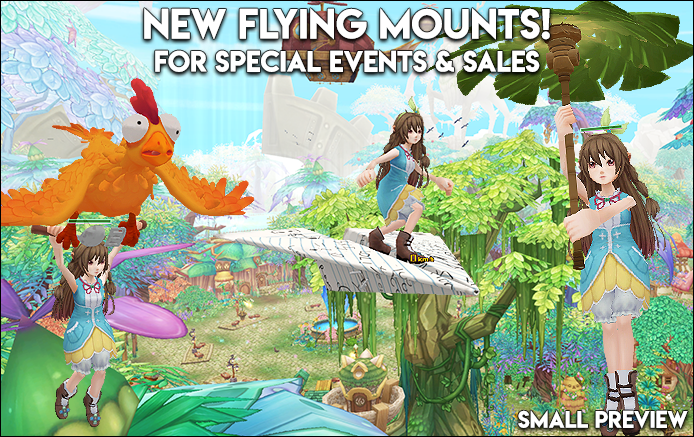 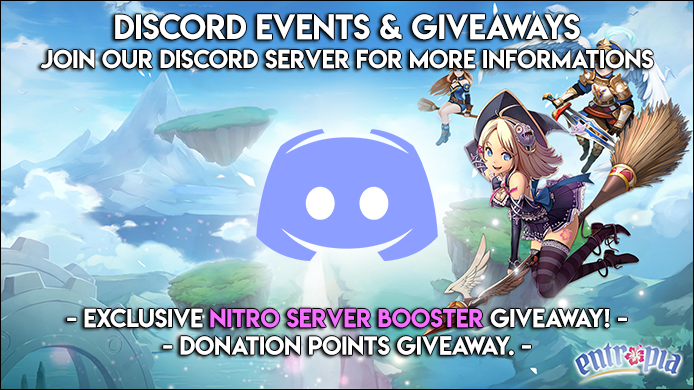 The Discord Giveaways + Screenshot Event will start in the next 6 to 24 hours for a longer period!
*Nitro Server Booster Giveways will also include some additional things.

- In the PvP Rumble none of the models should update themselves now when switching, so that it doesn't lead to lags.
- In the PvE system "Arena of Fear" you only need to wait 10 seconds now instead of 20 seconds until the next round starts.
- Players in Venux will be shown as "Enemy" for other players.
*Adjustments will follow.
- Other pets can now be awakened while you have already summoned a pet.
- When re-rolling items, you will now see a confirmation window showing you the current bonus value of an item and if you want to reroll it.
*If someone else clicks on an item, bonus values will no longer be refunded!
- Ultimate items with a Platinum Level Lock can no longer be equipped with the Equipment Switch System if you don't reached the platinum level for the Ultimate Item..
- If your character dies, your status pet will no longer lose any lives!
- You will now receive an in-game mail when you sell something with your shop vendor!
*Time/Sold Item/Currency/Price
- The Custom Movement System (Options) has been slightly optimized by us.
*You can now change direction from a standing jump (without running in one direction before).
- You can now follow other players with /follow name
*It has been deactivated in the Guild Siege!
- A bug in the shop search window has been fixed.
- The bug that you get stuck dead in the Guild Siege when reviving has been fixed.
*For security reasons we've added a command ( /kms ) which allows you to kill yourself (up to 2x per. Guild Siege) in the Guild Siege if you get stucked.
*You won't lose any life in the Guild Siege with that command!
*If the actual bug should not occur to 100% anymore, we will remove this command again!
- The respawn time of the map quest items in Aurania/Kebaria has been reduced from 180 seconds to 15 to 25 seconds!
- The NPC furniture now has a duration of 21 days!
- The texts of the NPC furniture has been adapted!
- The Dark Rartesia & Entropia Forest Monsters now all have the element "Earth".
- The Droprate of the Weapon Re-Roll Pieces has been slightly increased.
- The Gaia Ore item from the Premium Dungeon now lands directly in your inventory once you have defeated the boss.
- The Bead of Shade has been removed from the Tramnuk Dungeon as a drop.
*You can now get some additional Tramnuk Dungeon Runes instead!
- Baldur & Olbaid can now be dropped as Stat-Pet Skin in the Magma Cave Dungeon!
- The Trigrem/Ethral Boss monsters have been slightly speeded up!
- The Trigrem/Ethral monsters have been added as CS & Stat Pet Model in the game and can be dropped by the Endboss monsters from Trigrem & Ethral!
- The number of Soulreaver Coins which are dropping in the Ethral Garden Dungeon have been increased.
- The icons of the key recipes have been changed. (Holy/Blessed)
- The spawn rate of the Venux Sword Gnomes has been slightly increased!
- You can now purchase a special diamond powder casket for 1000x Diamond Powder from the Diamond Powder NPC.
*The box has the same function as e.g. a Perin!
- You can buy "Jar's" for aurania dungeon orbs from the Aurania Jewelry Exchanger. Each Jar contain 1000x Orbs of an Aurania dungeon.
*The Jar's have the same function as e.g. a Perin!
- A New Vote Weapon Lucky Box will be added to the Vote Shop later this day!
- On the PvP Rumble-Map the invisible walls have been reworked a bit.
- The Chapao Set (F) was added to the Flaris-NPC.
- The Ying Yang Cloak icon has been swapped with the Red Light Cloak icon.
- A new black market box has been added to the game, which will be offered now and then!
*This box includes some popular items from the black market!
- The GMs can now send a "GM - Treasure" to winners similar to the Event Token!
*This Treasure includes a few useful things.
*Each GM can only send a limited number of such boxes per day!
*When the box is sent, a message will be shouted across the entire server to indicate who received the box.
*No GM is forced to give it out daily!
*It can therefore also happen, if it seems too much to us, that such a box is not sent for one or more weeks.
- Performance Upgrades.
- Database updates.
- Security & Bugfixes.

The work on an even better PvE/PvP balance will soon continue on an extra test server!

Thank you for reading the patch-notes and we hope you like our changes!
We are still trying to provide you (the community) with a good server! :)