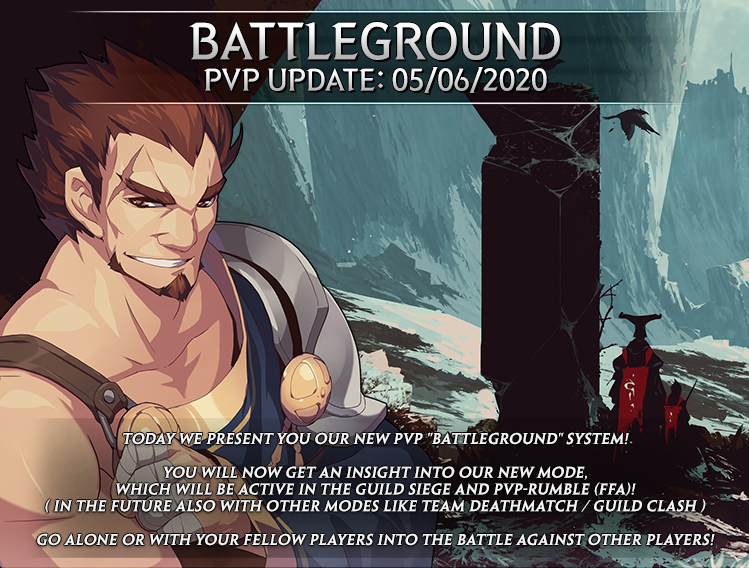 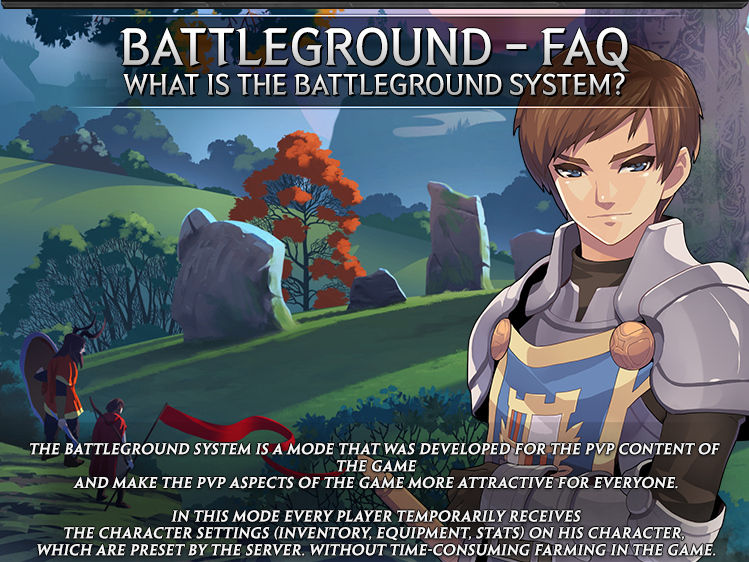 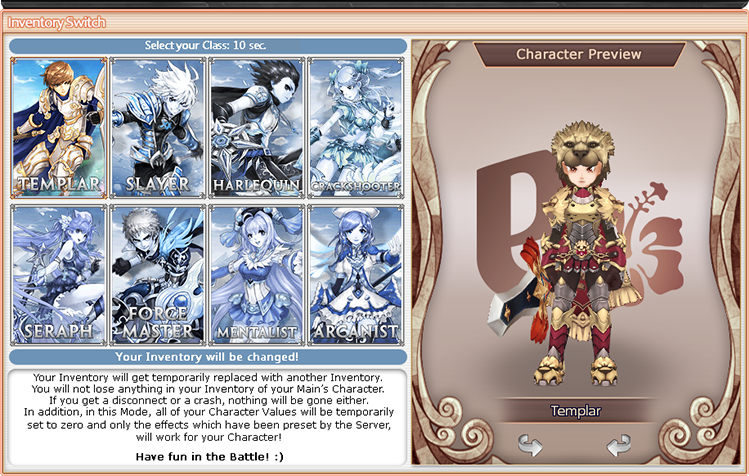 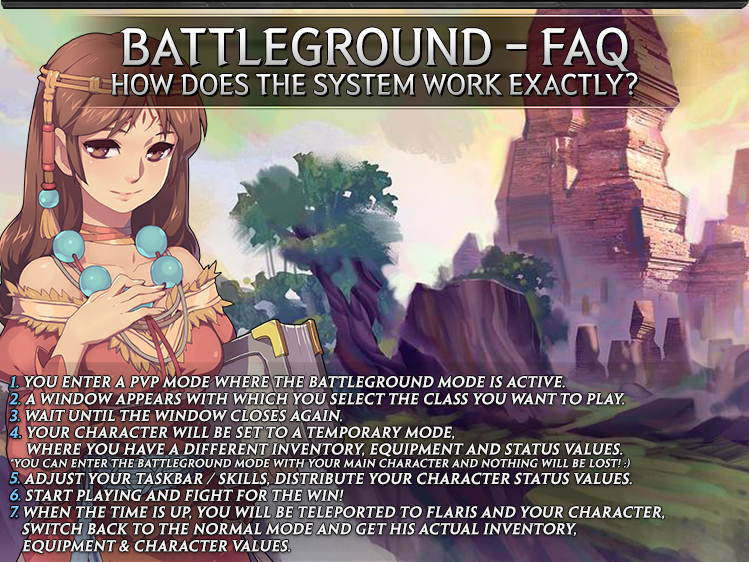 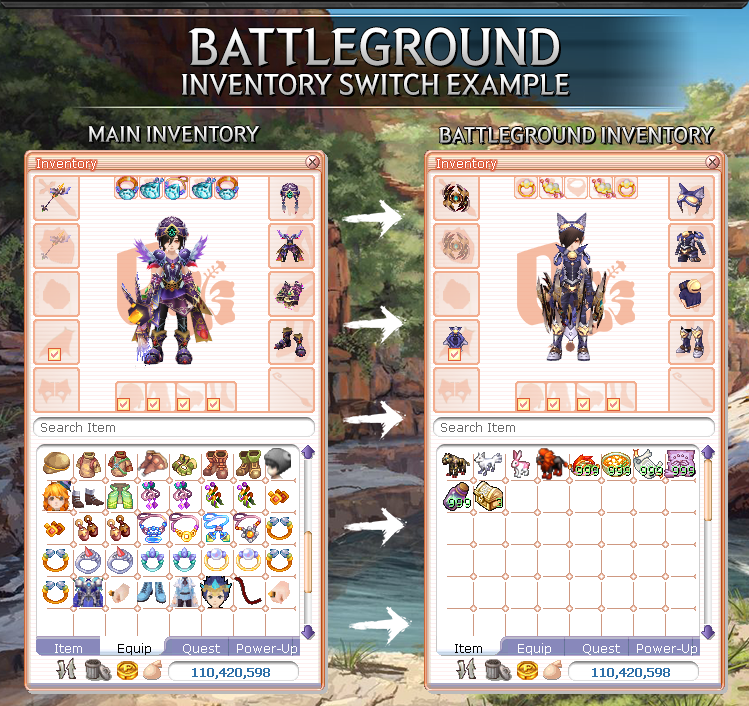 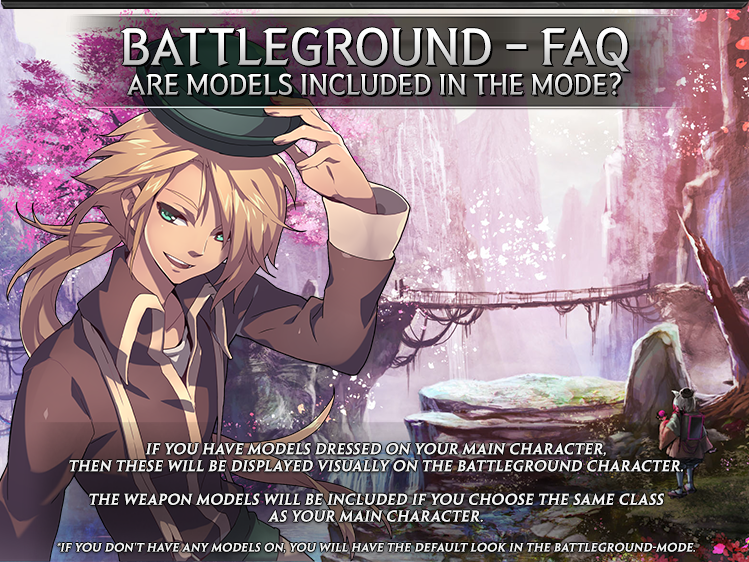 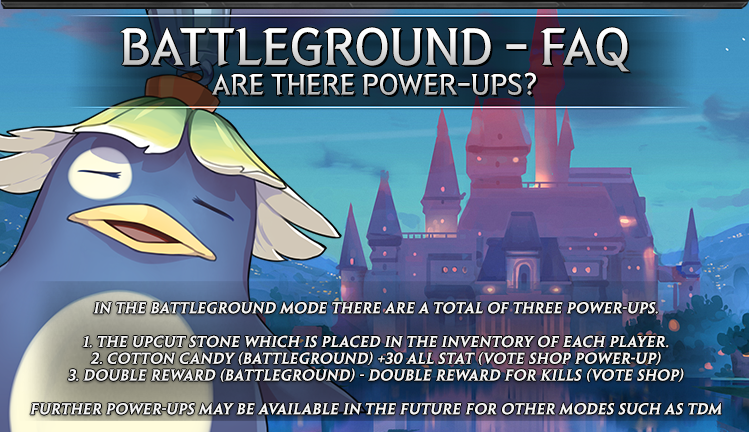 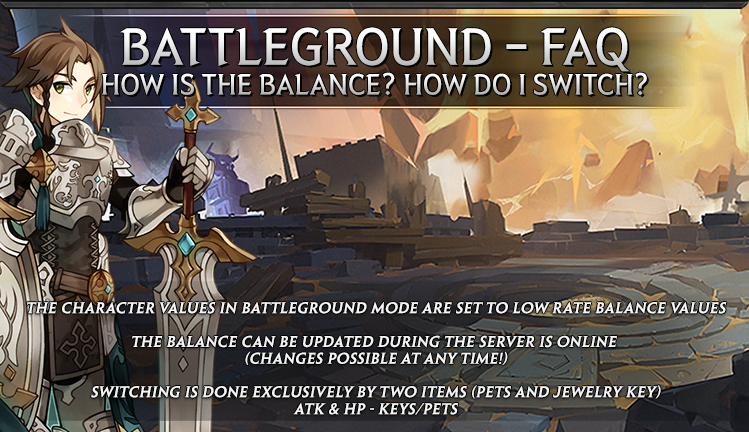 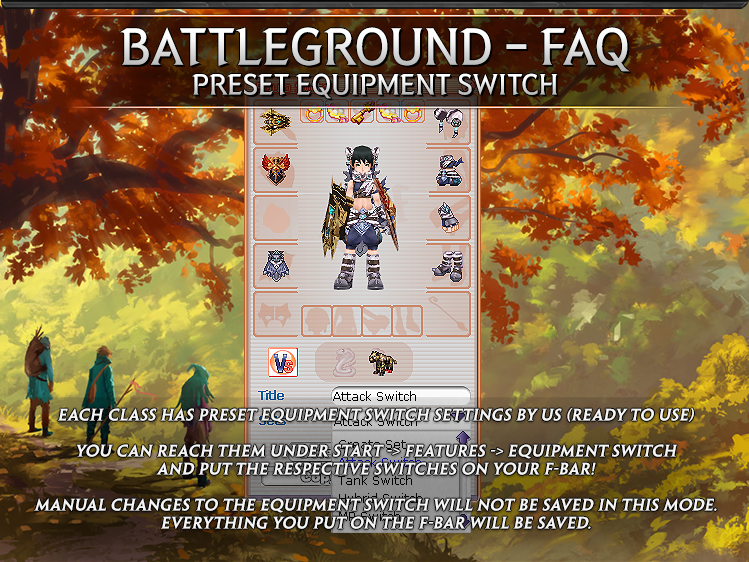 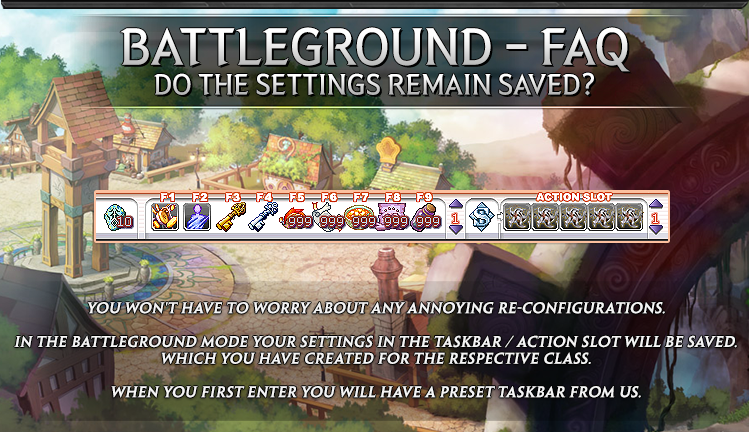 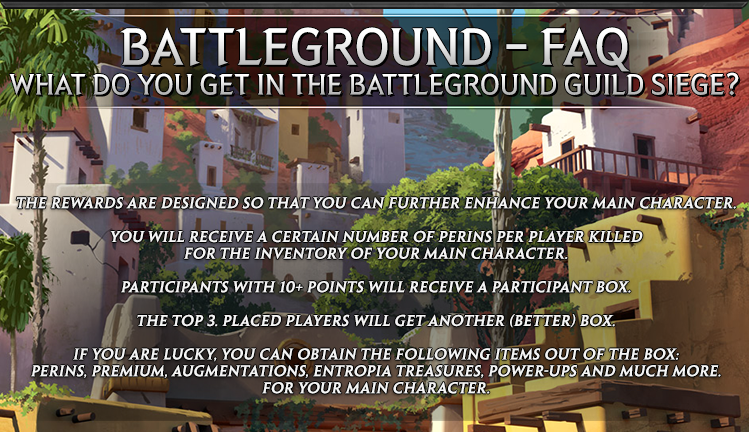 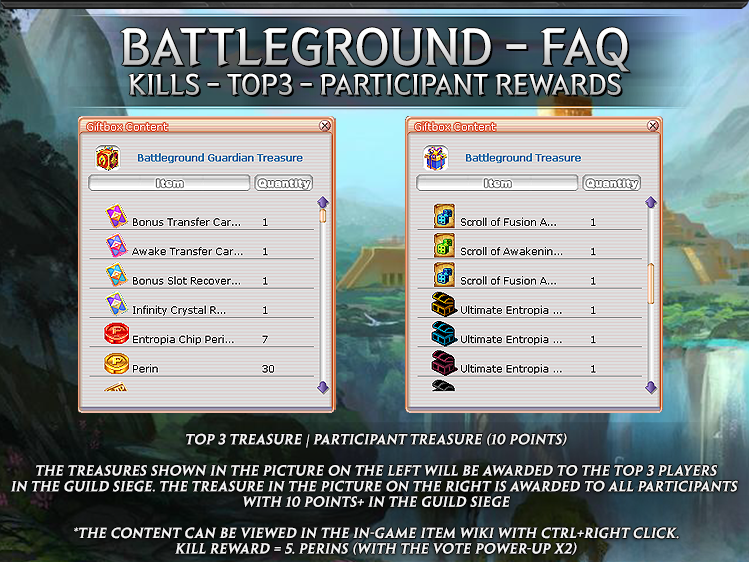 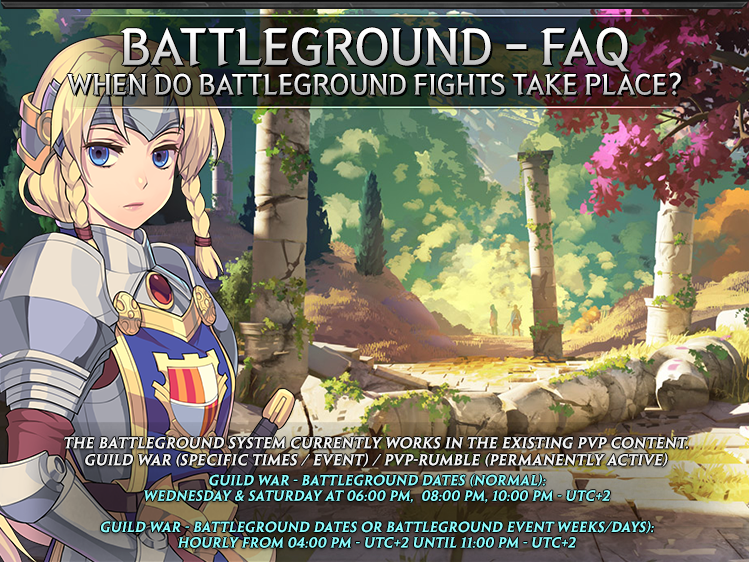 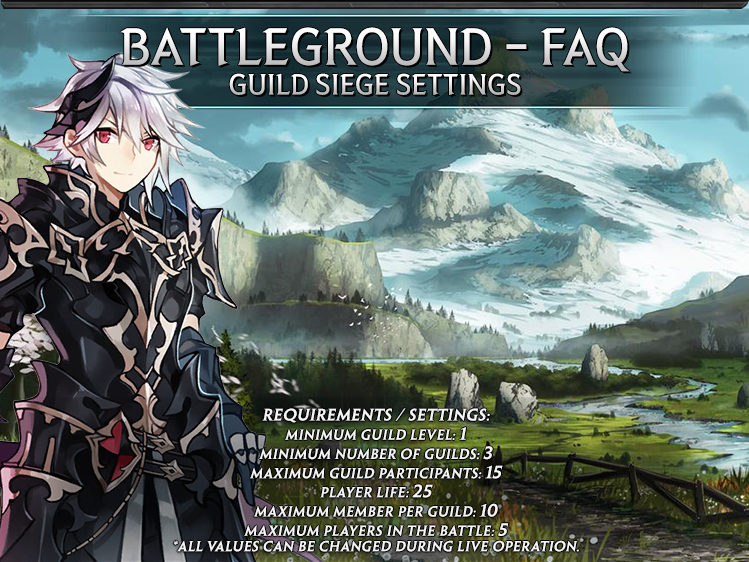 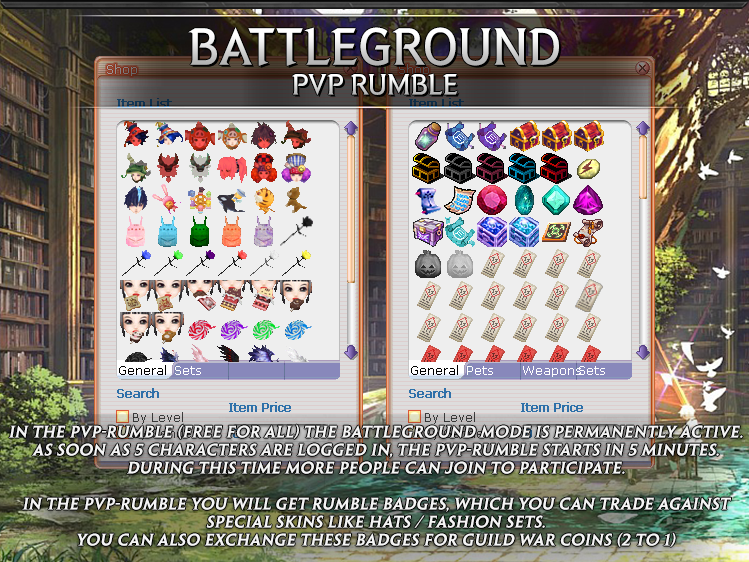 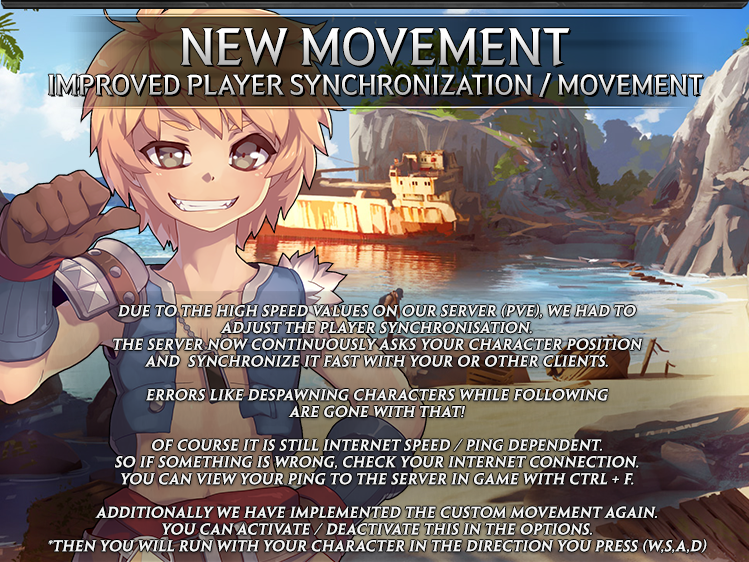 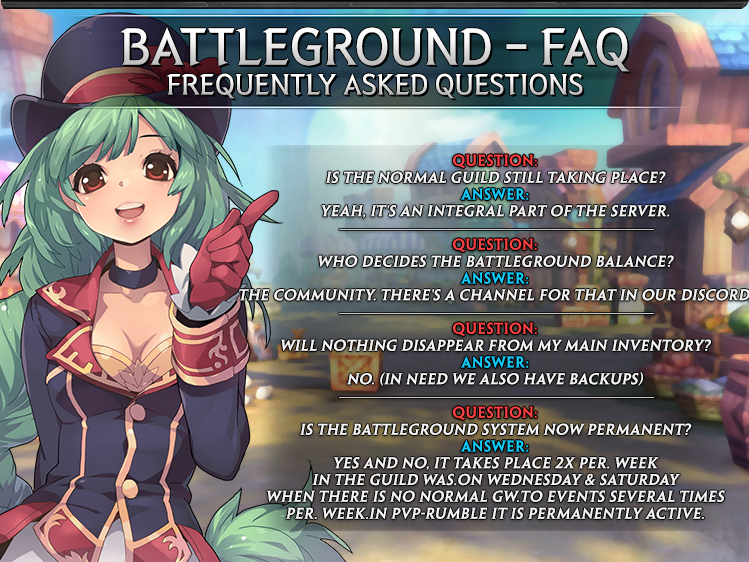 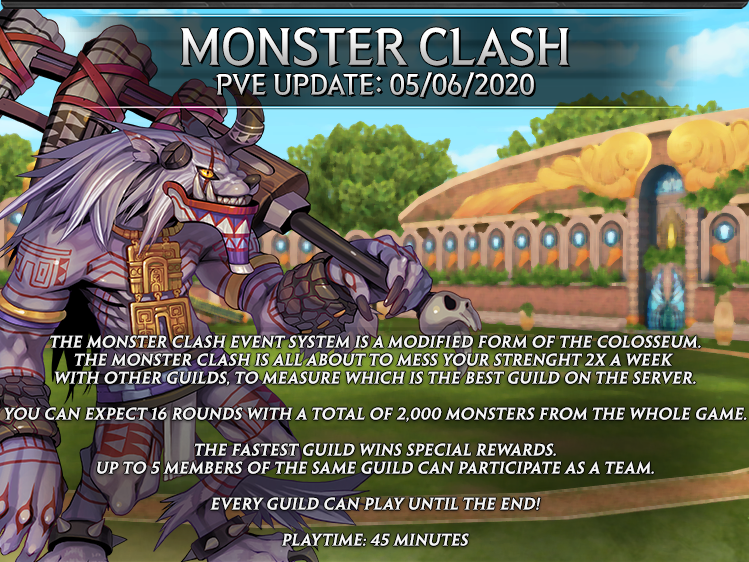 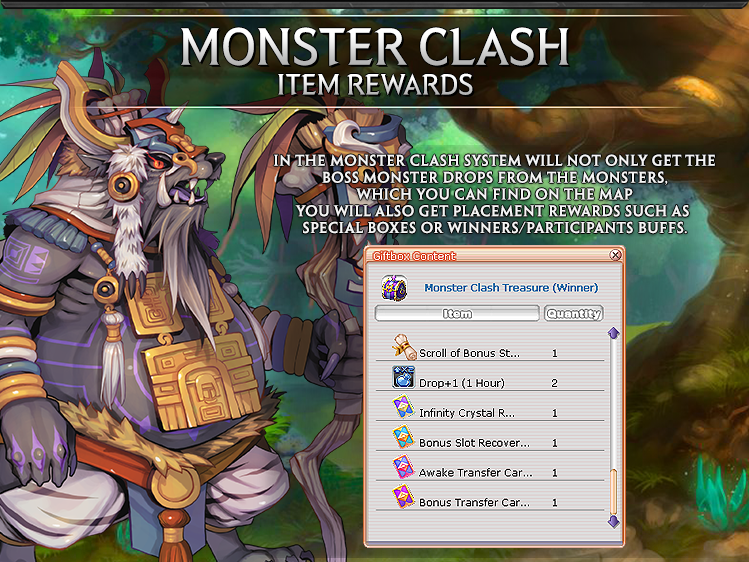 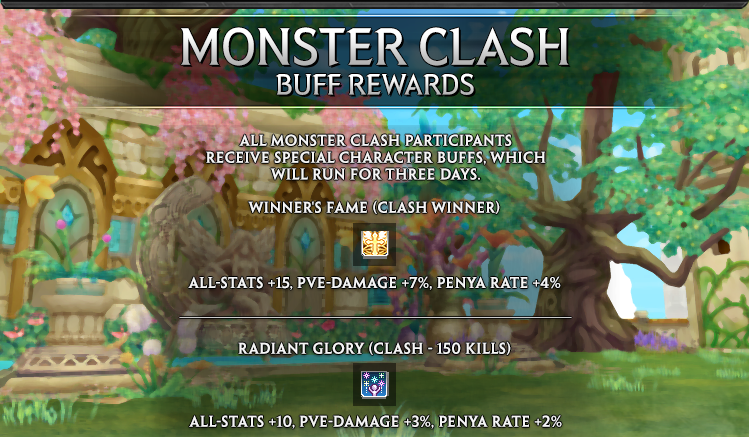 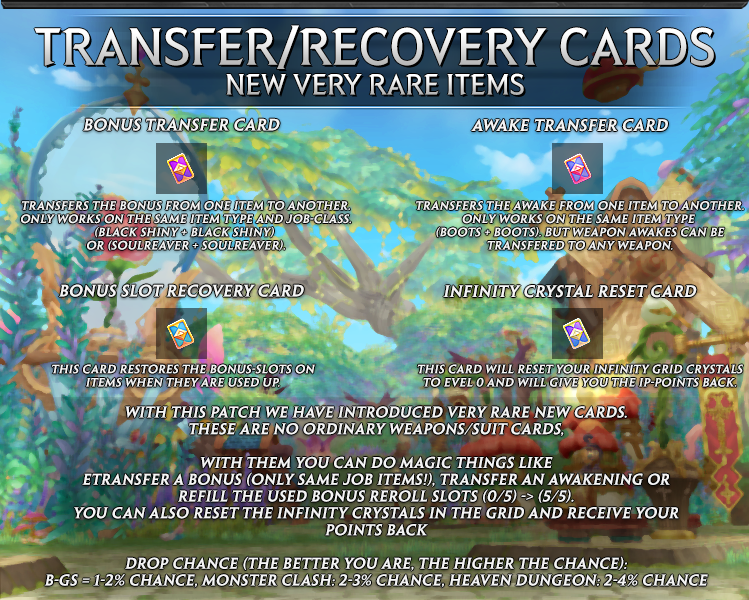 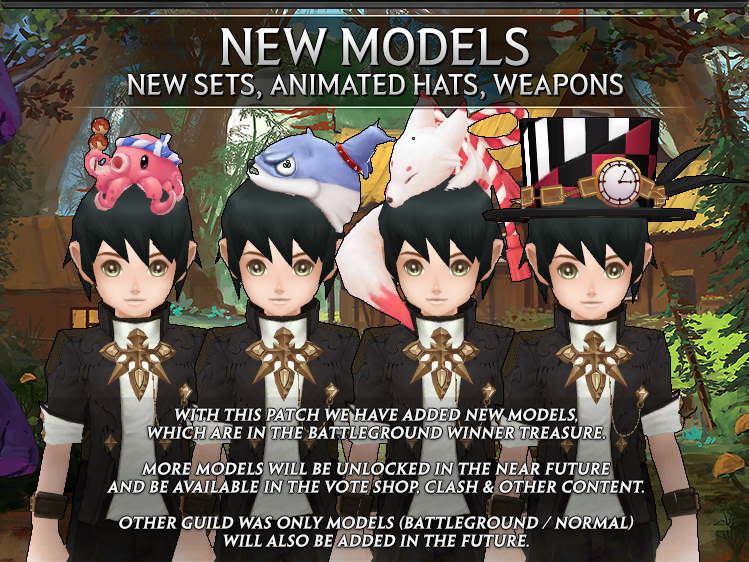 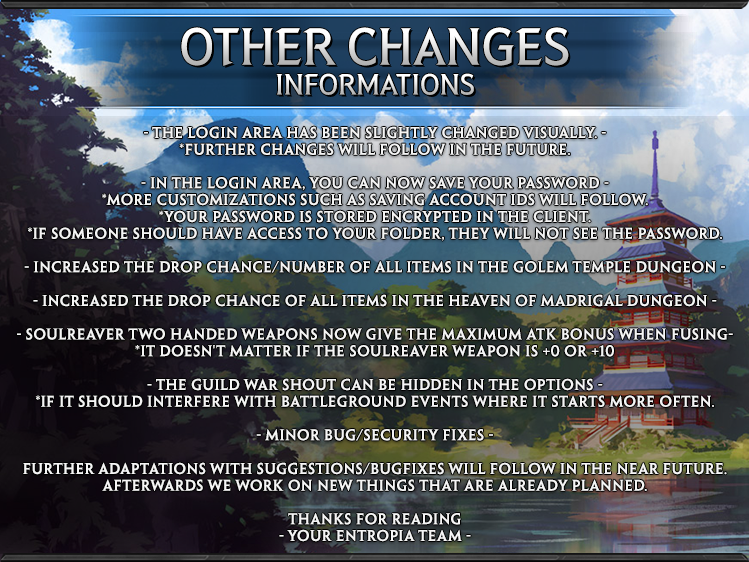 Today we present you our new PvP "Battleground" system with which you will receive PvP equipment provided by us.
In addition, we introduce you our new PvE-System "Monster Clash", which serves as a guild competition system and takes place weekly.

• Fixed the Ress-Bug in the Battleground Mode PvP Rumble and Guild Siege.
*This will also fix some rare Bugs in the normal Guild Siege Mode.
*The bug was not a common/known type of "Ress-Bug" and took us a few hours to fix it, causing this patch to be a little late.
• The Inventory Switch Window in the Guild Siege will now appear in the waiting area!
• The Guild Siege Kill Rewards (Perin) were decreased from 10p to 5p per. Kill.
*With the Double Reward Potion from the Vote Shop you will still receive 10p as long as it is active.
• Fixed a Crash in the Battleground Guild Siege
• The PvP Rumble can no longer be re-entered when you log out.
• The PvP Rumble is no longer accessible once the login time for the Rumble has expired.
• The Hide Guild Siege Shout option now works correctly.
• Fixed a bug where an infinity crystal effect stacked up due to the battleground mode.
• Anarchy buffs will no longer work in the battleground system.
• In the Monster Clash system some bugs have been fixed, which we only noticed during live operation.
*We have also made a few optical adjustments to the system.
*A rejoin button has also been added in case someone gets disconnected.
*You have two minutes to rejoin the Monster Clash.
*Laccotten have been deactivated in the Monster Clash.
• Minor optimizations were made to the new Movement System.
• Bug & Securityfixes.

Patch-Notes: 13/06/2020 (English)
• Some bugs with the Monster Clash system have been fixed.
• The number of monsters in the Monster Clash System has been reduced from 1600 to 1400.
• The Monster Elements in the Monster Clash has been changed.
• The targeting of players in the PvP-Mode (Guild War, Rumble) has been adjusted and now runs more smoothly.
• Fixed a synchronization (position) error.
• Heal-Items can now be used in the Equipment Switch System.
*The Default Settings for the Battleground Mode will still be adjusted with the heal items.
• Titles in the "Enemy"-Display System are no longer displayed in the Guild Siege.
*If we will remove the "Enemy" (Hide Player Names) in the Guild Siege or not, is still open.
• The Battleground Guild Siege will no longer be added to the ranking.
• The MvP/Crown status is no longer distributed in Battleground Guild Sieges.
• The Rumble Lock now takes effect from 02:00 AM to 09:00 AM - UTC+2.
• The Animated Hats will be Displayed Animated in the Modelviewer now.
• Adjustments to the "Key Switch" in the Battleground Mode will follow.
• A client crash error in the Secret Room was fixed.
•  The World Server (CH1) crash of today was fixed.
• Other minor bug fixes.
• Performance adjustments.

Patch-Notes: 15/06/2020 (English)
• Some character synchronization optimizations have been made in the Guild Siege.
• The Key-Switching in the Battleground Mode has been adjusted.
• The Switch now uses the food after you put on the equipment.
• Fixed a bug with the skill "Counter Attack".
• Rewards in the Battleground Guild Siege are distributed again correctly.
• Fixed the bug that the previous Guild Siege Ranking values were showed in a new Guild Siege.
• The Normal & Battleground Guild Siege will be Announced 10 minutes before the start with a Server Shout.
• Anarchy Buffs are now directly active again when you come out of battleground mode.
• The Damage from the Templar in the Battleground Mode has been reduced by -15%.
• If you register to the Rumble and change the map before you start, you will not be removed from the Rumble.
• The Teleport-Zone in the Monster Clash system has been removed.
• The Seraph Skill "Force of Light" can now be put back into the Action Slot.
*This is not possible in Battleground Mode, because the Skill have a Cooldown there.
• Several bugs with Animated Hats were fixed.
• Other minor bug fixes.
• Performance adjustments.