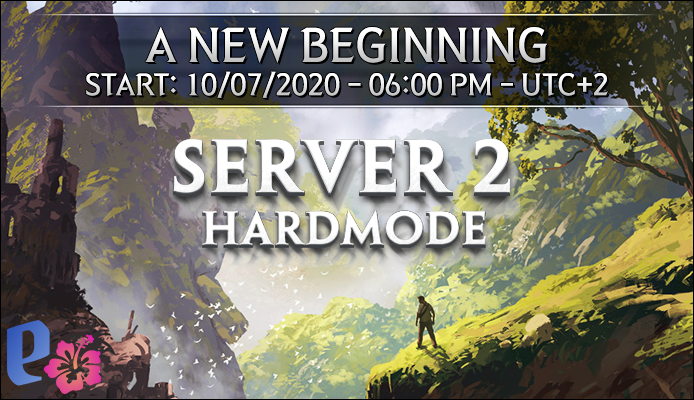 The whole team will not answer any questions that are answered in this news!
If anything is unclear, please re-read it again with more concentration.
Otherwise just wait until everything gets released from us.

Hello dear Entropia Community. In this news post, we will inform you what our future plans are for our server.
We ask you to read carefully, so no more questions can pop up.

As you can see, the player activity got worse over the past two months and didn't improve massively when we applied new patches.
This might be due to multiple factors, which led to our current position, at which we are right now, as example...

Due to the mentioned player activity and the factors above, we came up with the idea to open a second Server (Cluster) and to pull a Wipe (Fork Wipe).
*Fork = Split

The first Server (Cluster 1) will stay how everyone knows and has been online from the 15th December 2018 and will still get updates.
*We will go on furhter about the Cluster 1

The second Server will get a sort of Wipe with restrictions.

The second server will get the same content as the first server, but the endgame content launches will be stretched into a later longer time period.

The second Cluster will be harder than the first one.
*Cluster 1 will still remain how it is (simplified) and you will be able to still play on it.
*Simplifications will come aswell on Cluster 2 during the next few months.

That is why not everything will be available on day one. Some sections of the coming content will be adjusted aswell, as soon as they are getting published.
The community can come up with suggestions aswell, before we actually deploy the content updates on that cluster.

In between the ongoing cluster, we also provide new systems and game content, because we head into a different direction with that project.
There will still be updates with community suggestions, improvements, new models and so on.

The XP, Penya and Guild XP rates will get lowered extremely!

Everyone will get their donation points back, which accumulated during the past few years.
*That means, that you will get every point, which you spent on cluster 1 back on your cluster 2 account.
*We will go on in depth later in this article.

The Donate/Vote Shop from the second cluster will get modified aswell and some items will be available later on.

It might also happen, that the second cluster will get merged with the first server in a few years
*The future is not 100% certain and noone knows what will happen.

Because we don't just want to open a second cluster to grab the money from your pockets, like other projects do, we decided to refund a part of your points to the second cluster!
There will be an additional currency (new donate and vote points), which we add to your account, the way you had them on the first.

Blue Diamonds (Server 1):
Will not get refunded, because the cluster will remain how it is right now.

Vote Punkte - S1 (Server 1):
Will not get refunded, because the cluster will remain how it is.

The refund of the Red Diamonds (donate currency) will reach into our last projects from 2013 to 2018.
Unfortunately we cannot refund 100% of the donations (or better conditions), because it would've been way too much and the server wouldn't earn enough to survive for a longer period of time.

Question: How does the donation feature work? Do I have to decide for a server to donate on?
No! You will receive your donate points on Server 1 and Server 2 simultaneously!
Means, when you donate 10$ in our server, you will receive 1.300 Blue Diamonds + 1.300 Red Diamonds.
You can spend the donate currencies on both servers. (so you always have double the amount!)

The Donate shop will be opened just after 4 to 6 days after launch!

The Donate shop will be handled differently on th second cluster.
Specific items won't be available during the starting phase i.e. Shiny Weaponry
These will be added later on, to make it easier for beginners to progress in the game aswell.
Items will be available more commonly in sales and won't be permanently added.
*This includes the Ultimate Entropia Treasures aswell.

The Ultimate Entropia Treasures will be added to the shop bit after bit and will be added to different content aswell (farmable).
*From these Treasures, you will get different Ultimate Pieces as bonus, which can be exchanged for a full Ultimate item.
*A new Ultimate Item / Treasure will be released every 4 to 8 months.

The donation reward timeline will be added to a later point.
*Maybe without Ultimate Items in the first phase.

Fashion Models will be switched out every 3 to 6 days automatically.
*In the beginning of Entropia, this has to be done manually.

Some Vote Shop items will be released to a later point

You can Vote daily up to 3 times, if you use a different IP adress and device.
*Proxy /VPN votes might lead to a ban.

You can start gaining Vote Points already, if this announcement gets published.

The weekend events on Server 2 won't be as often as on the Server 1.
These events will be started in a weaker variant with not that high bonus items.
*The events will be better progressively.
*New events will be added to the game later on.

Events like the Easter Labyrinth or the Pokemon and Halloween Dungeon will take place on the second server aswell.
*Maybe there will be new content.

The donator of the month from Server 1 will NOT get the rewards on Server 2 again.

New donator of the month will get all rewards on Server 1 and Server 2.
Custom Fashion, which the top donator chose, might be restricted on Server 2.
*That means, you can't wish for Fashion that can be farmed in later expansions.

The donator of the month will get all bonus Items on both Servers aswell.

We will be looking for new assistance on the launch of the new cluster.
You have the opportunity to apply as Gamemaster on Entropia via the ticket system.

The ticket / the application has to be written in english.

You must have the following criteria:

- You are experienced with our Server. -
*Up until the endgame content on Server 1.

- You have decent knowledge in the english language. -
*Other languages are nice to have.

- You haven't been present in a negative way before. -

- Players, who have been around for a long time and played in multiple scenarios are prefered. -
*As long as the other things are fine aswell.

- We do not want to know anything from your private life. -
*We can talk about that privately, if there's time ;)

Gamemaster will be rewarded with a bunch of Donte Points monthly.

We are looking for advertisement of our Server.
That's why we ask you to produce videos about the second cluster in the early stage!

You have the opportunity to publish videos and streams on our Discord server.

Players, that produce a lot of "Social Media Content", will get a YouTube or Twitch badges ingame and a according Discord group.
With that Discord group, you will have access to the social media channel, where you can write down your character name and receive Donate Points every 1 to 2 weeks.
The amount of points depends on your performance.

With the start of the second cluster, we want to give some players a second chance.
That means, that we might give that chance to the players that got punished for using Bots, Tools or tried real world trading.

That doesn't imply, that everyone will get a second chance.

Special players, that we've got our eyes on from the past will not get unbanned.
You can still try with a ticket.

Server 1 will still be exist and will get updated with Events and Sales.
New content will be differently compared to Server 2. (different directions)

The first Server will be pretty empty, when Server 2 launched.
We will still update the Server with Events, changes and bugfixes.
New content will be added a little bit later, since we are focusing on the new Server 2.
*A lot of players didn't even see the endgame content on the first Server.

The content on Server 1 has been simplified recently.
The exchange prices and the starting items got changed.

As mentioned above, you will still get Donate Points rewarded when you donate for Server 2.

The news for Server 1 and Server 2 will be separated visually! 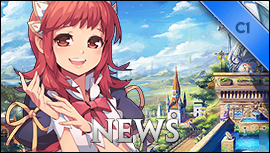 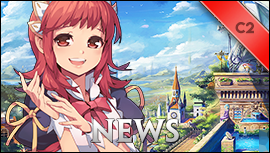 We decided to publish the content on Server 2 in steps, as mentioned previously.
We made that decision to create and plan our content perfect for the players, so everyone can catch up, even if you're a new player or a returnee.
The content will also get simplified by a bit, so that new players can catch up in a fair tempo.
We will put the quality over the quantity in this project, so that every player can be satisfied.

Its important to point out, that we still apply suggestions and changes.
Bugs and game errors will be put in the highest priority to ensure you a good gaming experience.

Server 1 will still give you the opportunity to participate on certain Events like the Guild Sieges, Battleground Sieges, Secret Room, Monster Clash and so on. You can also still play then endgame content. 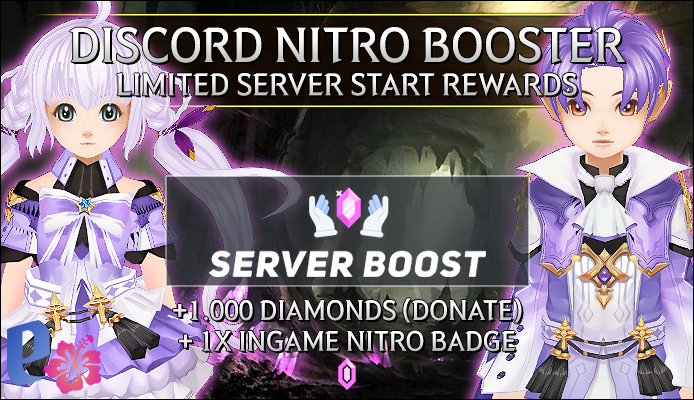 Any player who double-boosted our discord server until the 08/07/2020,
receives unique models, which will only be available at the start of Server/Cluster 2
Additionally, every Double Booster will receive: 1,000 Diamonds and a Nitro Badge in the Game! 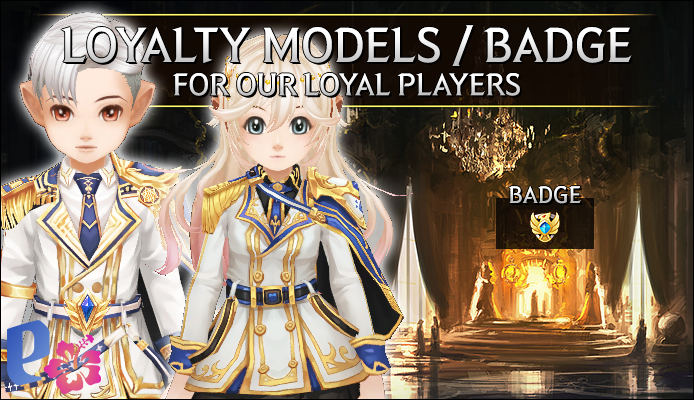 From us selected players who have remained loyal to the server until now, without being negatively noticed,
receive special models and a special character badge in the game when the server starts (Without effects).

Thanks for reading! <3
- your Entropia Team